“They’ve been talking about it for years, but now MIT has finally done it: they have unveiled their tiny, folding city car. Previously referred to simply as “CityCar,” the automobile was introduced as “Hiriko” to the European Union Commission chief in Brussels in mid-January, 2012. The name means “from the city” in Basque, and it’s clear that this tiny electric automobile is definitely meant for city streets. 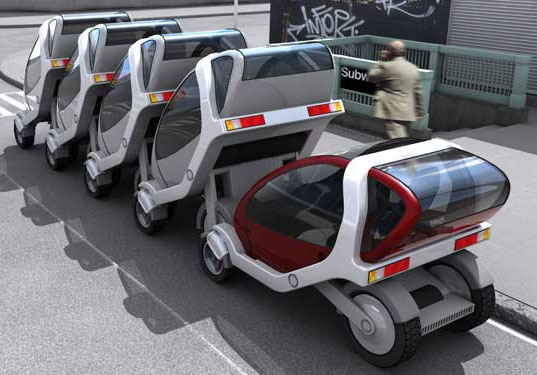 Hiriko has a 60-mile range and does away with the centralized motor; instead, each wheel has its own drive motor. It also does away with doors, instead offering entrance and egress through its upward-opening windshield. When you park the car, its rear wheels scoot up a bit toward the front wheels, folding the car into a much smaller size so that three of them can fit into a standard parking space.

The Hiriko might eventually be sold to individuals, but its first mission is in a car-sharing scheme in Spain. Just like the bicycle sharing schemes becoming popular in cities all around the world, the car-sharing plan will involve community-use electric cars that can be rented and returned at designated stations. There are plans to roll out the Hiriko-sharing plan in several other cities in 2013 and beyond, so there will be plenty of chances to ride in one of these endearingly weird little vehicles.”