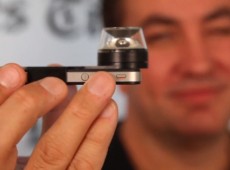 لقراءة الموضوع باللغة العربية اضغط هنا As published on http://latimesblogs.latimes.com: The crowd-funding website Kickstarter has given rise to a number of interesting projects since its founding in 2009. One effort in particular caught my eye a few months ago, after my father suggested I take a look: the Kogeto Dot. So what exactly is a Dot? It's a plastic lens attachment for Apple's iPhone 4 that allows users to capture video in a 360-degree panoramic END_OF_DOCUMENT_TOKEN_TO_BE_REPLACED