Styled on the look of a small bonsai tree this charger uses twenty seven solar panels on the end of each branch to produce energy from the sun and then charge the internal battery. Once charged it can provide thirty six hours of charging power for all sorts of portable devices and the great thing is that it keeps charging so long as there is sunlight. This how the Electree Solar Bonsai works; The 27 solar panels installed at the tip of the branches capture the solar energy which is then stored END_OF_DOCUMENT_TOKEN_TO_BE_REPLACED 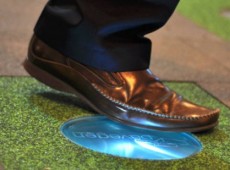 PaveGen slabs, a technology developed in part by Laurence Kemball-Cook, convert human traversal into electricity. While the tiles have been in testing for a while now, they are slated to make their first big commercial appearance between London’s Olympic stadium and theWestfield Stratford City mall during the 2012 Olympics. The twenty PaveGen tiles to be placed are expected to generate enough electricity to power at least half of the malls outdoor lighting needs, practically from nothing. The END_OF_DOCUMENT_TOKEN_TO_BE_REPLACED