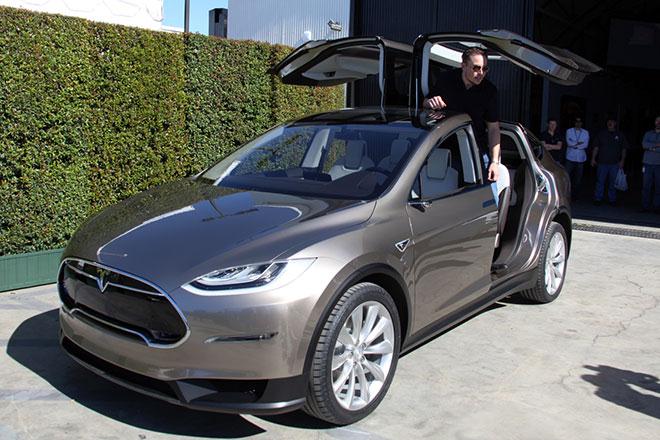 “We’ve created a car that has more functionality than a minivan, more style than an SUV and more performance than a Porsche 911 Carrera,” Musk said, making his obligatory comparison to a premium automaker during a small gathering for the press before the formal unveiling Thursday night.

It remains to be seen if Musk makes good on that last claim — there is but one Model X prototype, and he wasn’t about to let us drive it. But the X is an attractive enough automobile, with sleek lines, a curvaceous shape and striking “falcon wing” rear doors that open like wings. 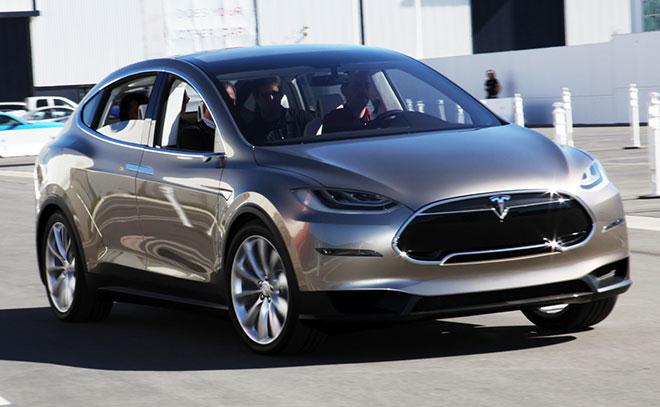 The X shares roughly 60 percent of its components with the S, but it is a bolder and more technically challenging effort. It rides on an S chassis lengthened four inches to accommodate true three-row seating and room for seven people. (The S offers an optional rear-facing third-row seat just big enough for children.)

The X uses an identical version of the S powertrain, with a 3-phase AC induction motor and fixed-gear gearbox, to drive the rear wheels. But in a twist, Tesla will offer the option of a small motor at the front for all-wheel drive.

The X and the S share the same pancake-style lithium-ion battery pack mounted below the floorboard between the axles. But because the crossover will weigh 10 to 15 percent more than the 4,200-pound sedan, it will offer 10 to 12 percent less range from the 60 or 85 kilowatt-hour packs Tesla will offer. Expect 200 miles or so from the smaller pack and 270ish from the larger. 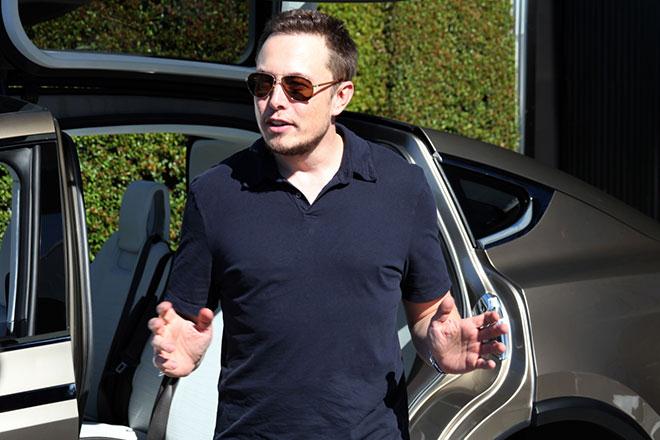 More striking than its spec sheet is the Model X’s design, with rear doors that arc upward and outward on double-folding hinges. Musk says the design offers greater access to the second and third rows, and demonstrated their ample space by standing upright beneath one while remaining in the car. They’re cool, but clearly in beta form. It took more than one Tesla employee to oh-so-carefully close them, and at one point they didn’t latch completely.

The tall roof — which features generous skylights — allows seven adults to sit comfortably inside. And there’s plenty of cargo space at the back and under the front hood. Ever the showman, Musk compared the X to the Audi Q7 to highlight the space inefficiency of conventional SUVs.

“See how ridiculous it is?” he said, gesturing toward the third row of the Q7. “You can’t get in there. It’s laughable. There’s no room back there. You’d need to be a midget.”

He paused, then added with a final flourish, “Look at that little mouse hole. It’s embarrassingly bad.”

Yes, Mr. Musk, the X is supremely practical, but it looks a bit like the love child of a Buick Enclave and a BMW Gran Turismo. 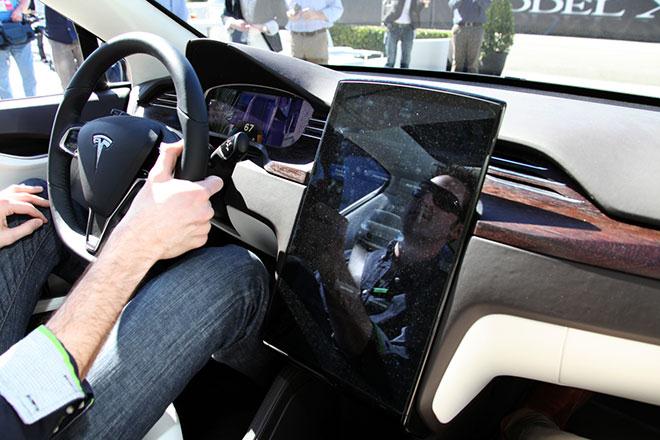 Tesla took us for a quick spin. The X is everything you’d expect of an electric vehicle: smooth, swift and silent. There is a satisfying whoosh of low-end torque off the line, which suggests Musk might not be blowing smoke when he says the X will hit 60 mph in a scant 4.4 seconds.

Interior surfaces are so slick and smooth as to seem unreal, and we wouldn’t bet on the exquisite wood and aluminum details seeing production. But the X, like the S, features a massive 17-inch capacitive-touch LCD touch screen front and center in the dash and adds iPod Nano-like touch screens in the steering wheel.

As you’d expect, there was no shortage of Angelenos gushing over the X as Musk promised to deliver us a cleaner, greener, more efficient future. Even California Gov. Jerry Brown was on-hand for a star-studded gathering after Tesla unveiled the car for the press.

Tesla will build the X at the factory in Fremont, California, where it is currently assembling the Model S. Look for it in 2014.