A local council in central Turkey has built a morgue with a warning system, in case apparently dead bodies come back to life.

The Turkish Anatolia news agency reported the mortuary’s refrigerators are sensitive to movement inside.

A cemetery official said the slightest motion would set off an alarm.

“If the patient, proclaimed dead by doctors, awakens from a state of unconsciousness, then we consider each and every possibility,” he said.

The official, Akif Kayadurmus, added that the refrigerator doors were kitted out with internal door handles.

The mortuary in the municipality of Malatya province, has a capacity for 36 bodies. 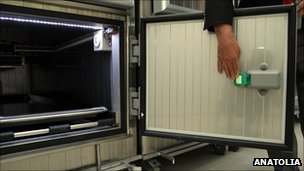 The mortuary doors have release catches on the inside