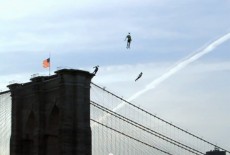 No, this is not a magic trick (nor is it Real Magic 😛 ): Sometimes I wonder why people use the phrase “when pigs fly” when they try to convey that something is impossible. Shouldn’t they say something like “when humans fly,” since scientists could one day genetically modify pigs to give them wings? You know, since it’s less likely for these scientists to do their experiments on human beings. Or have they already succeeded in doing so? Pictures don’t lie, but you aren’t END_OF_DOCUMENT_TOKEN_TO_BE_REPLACED