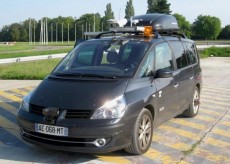 We have previously posted about Google's Self-Driving Car and how it made it to the street, and now here's another sample of a french self-driving car that takes it to the road! Autonomous vehicle projects are picking up speed -- literally. Leading the pack is Google's famed robot car, which has logged thousands of kilometers driving on public roads. But there are projects also in Italy, Germany, the U.K., and reportedly China. Now we've learned about an interesting self-driving vehicle END_OF_DOCUMENT_TOKEN_TO_BE_REPLACED