Posts Tagged ‘stick to the window’ 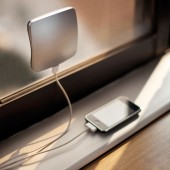 "Solar energy can be considered “green” energy in the sense that it’s readily available and that it doesn’t release pollutants to be generated. Solar cells and batteries aren’t exactly new technology. There are already a lot of released products and gadgets where the sun is their major (and sometimes, only) power source. However, the idea of putting your device under the heat of the sweltering sun isn’t very appealing because it might overheat and end up getting fried if you don’t END_OF_DOCUMENT_TOKEN_TO_BE_REPLACED