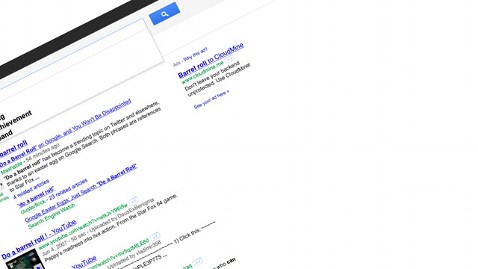 Google after you search for “Do a barrel roll.” Screen shot by ABC News.

Got a moment to kill? Try this:

Go to Google’s homepage. Type in the words “Do a barrel roll.” Click Enter.

Did the Earth move for you? The image in your browser should — well, it should have done a barrel roll. As often happens, the Internet was filled with speculation when people began to notice it on Thursday. Many Twitter posts asked if it was a takeoff on Apple’s iPads, with their built-in accelerometers so that their screens turn if you turn the device (the New York Times’ Bits blog called the effect “Siri-like”). At least one blogger suggested Google was invoking Nintendo’s “Star Fox.”

No such notions, says Google, which sent us this explanation:

“Today’s fun query, ‘do a barrel roll,’ was created by a Google software engineer with the primary goal of entertaining users — while showcasing the power of CSS3, a presentation feature of modern browsers. The “do a barrel roll” query, which causes the search page to spin, will remain in place for a while.”

(By the way, Google says you may not see the effect in older browsers. Newer ones support HTML5, the newest version of the code that makes online content work.)

Twitter has been lighting up as people discover “Do a Barrel Roll.”

“Google is being nerdy again and I love it.”

“It will bring you joy for approximately 5 seconds.”

“You won’t be disappointed. Or maybe you will if you are a grump.”