AS jackets go, it looks far from fashionable, but its Japanese maker cannot meet sky-rocketing demand for “air conditioned” coats with built-in fans. 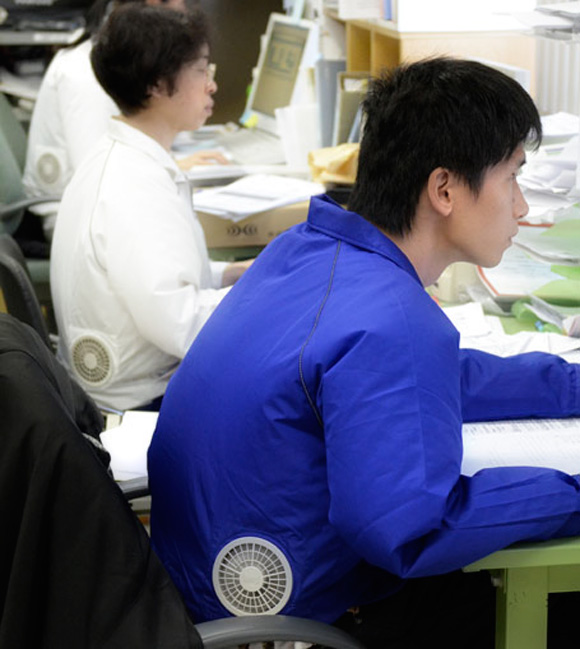 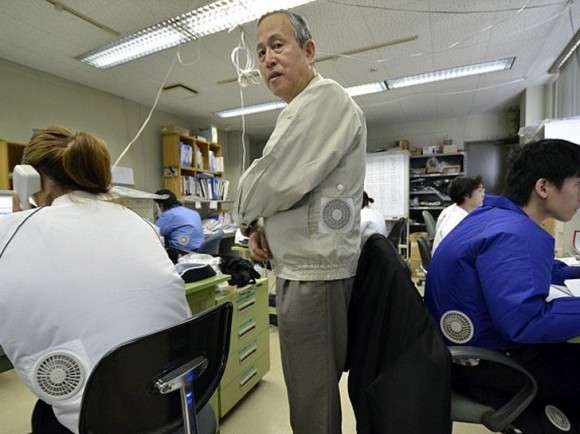 Two electric fans in the jacket can be controlled to draw air in at different speeds, giving the garment a puffed-up look. But this has not deterred those happy to be cool rather than “hot” when it comes to fashion.

“I work in a very hot place and have to wear long-sleeved outfits, so I came over to buy this to stay cool and to prevent heat stroke,” said Ryo Igarashi as he left the Kuchofuku office after buying an air-conditioned jacket.

Fan-tastic: Kuchofuku president Hiroshi Ichigaya and an employee clad in jackets which have cooling fans, at the company’s headquarters in Toda city, suburban Tokyo. The fans are powered by a lithium-ion battery pack that lasts 11 hours.

Igarashi, 33, said the clothing offers him relief at hot construction sites where he, coincidentally, installs air conditioners in buildings. 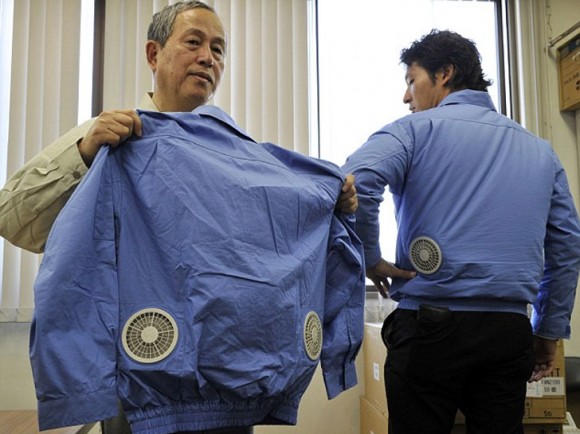 Nearly 1,000 companies in Japan use Kuchofuku, including automobile giants, steelmakers, food companies and construction firms. Among its other products, the company also sells air-conditioned cushions and mattresses that use Kuchofuku’s patented plastic mesh system that allows air to circulate while supporting weight.

The products have taken on extra significance since the closure of the tsunami-crippled Fukushima Daiichi nuclear plant and a government decree obliging big companies in the Tokyo and Tohoku northern region to reduce power usage by 15% to avoid blackouts.

There are initiatives that encourage employees to ditch jackets and ties and turn down air-conditioning, while the power-saving drive has also sparked demand for cooling gadgets.

Imports of electrical fans through Tokyo port hit a record high in May, jumping 70% from a year earlier to 1.24 million units, according to the customs office. 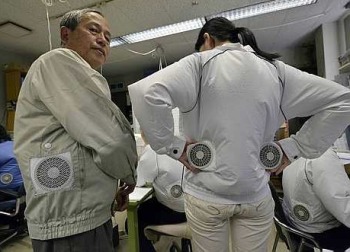 The fans in the Kuchofuku jacket are connected to a lithium-ion battery pack that lasts for 11 hours on a single charge, consuming only a fraction of the power used by conventional air-conditioning, said company president Hiroshi Ichigaya.

Ichigaya says that his clothing offers a counter-intuitive solution – by wearing more, a person can feel cooler than if baring it all.

Up to 20 litres per second of air circulates throughout the jacket and escapes through the collar and cuffs, drying off sweat and cooling down the wearer.

The idea of “personal air-conditioning” struck Ichigaya – a Sony engineer for two decades until the early 1990s – when he was trying to invent an air-conditioner that would use little electricity.

“It came to me that we don’t need to cool the entire room, just as long as people in it feel cool,” he said.

Kuchofuku, first launched in 2004, typically draws demand from factories and construction sites but the company has recently seen orders come in from office workers and housewives. A standard air-conditioned jacket sells for around 11,000 yen (RM420), with others priced higher.

A central government official recently approached the company to buy 500,000 jackets, but Ichigaya said he had to turn down the order because the company was unable to boost production in time to meet demand.

The company will sell a total of 40,000 jackets, cushions and other air-cooled products this year, double last year’s figure, Ichigaya said, adding that sales would reach 80,000 if he could manufacture enough. – AFP